Farmrail System, Inc. is an employee-owned holding company for two Class III common-carrier railroads comprising "Western Oklahoma’s Regional Railroad."   Farmrail Corporation (FMRC) has acted since 1981 as a lessee-operator for Oklahoma Department of Transportation, managing an 82-mile east-west line between Weatherford and Erick. An additional 89 miles, Westhom-Elmer, was purchased from the state in 2013 after 20 years of operation under lease.  Another wholly owned affiliate, Grainbelt Corporation (GNBC), was formed in 1987 to purchase from Burlington Northern Railroad Company 178 miles of line linking Enid and Frederick. The parent company also has a joint-venture interest in New York’s Finger Lakes Railway Corp. (FGLK).

Among all our different forms of transportation, none can be more “all-American” than Farmrail and many other similar short-line railroads throughout the nation. Our dedicated team of Americans operates locomotives and railcars over steel rails and wooden ties, all made in America, using domestically sourced fuel to haul other commodities produced in America. We have good reason for proudly flying the Stars and Stripes. 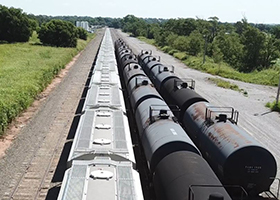 Farmrail has benign Southwestern storage locations for up to 1400 railcars, from singles to unit trains. Interchange is off BNSF’s Avard-Sub line at Enid, Oklahoma.

For information regarding car storage possibilities with Farmrail please contact Heather at heatherharding@farmrail.com